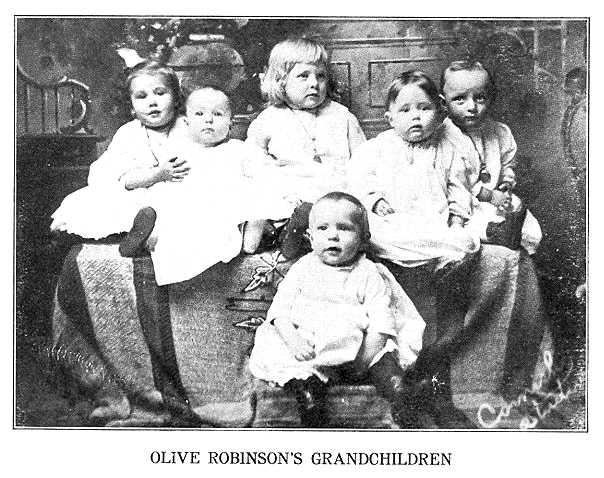 Olive Elma (Jane3, Jane2, John1) had her birth in Parma, Ohio, August 10, 1851. She attended school in Parma. The family removed to Bloomingdale, Mich., in October, 1864, and to Lee Township, Allegan County, Mich., in 1867. During the years she was at home she bore her share of family burdens and hardships.

"In November, 1873, Charles left Sturgis for Kansas. He soon after filed a claim on a quarter section of land in what was known as the Osage Trust Lands, situated near South Haven, Kan. He put up a claim house, 12 by 14 feet in dimensions. On March 20, 1874, I bade farewell to my friends near Lacota, Mich., and went to join my husband in our new home. On seeing it my first thought was, "How can I live in such a little house?"

On July 7, 1874, came the great Indian scare. When we arose in the morning people were passing, driving their stock before them, and their wagons loaded with such household goods as they could load on. They all seemed to be in a great hurry to get away. On our inquiring what was the trouble they told us that the Indians were on the war path and were then at a little place called Caldwell, murdering and scalping settlers. We did not know what to do. As we had an ox team only, it did not look like getting away very fast. Some of the neighbours came and proposed that as many of us as could should join forces and stay and fight the Indians. Five families of us gathered in the largest house in the neighborhood and waited and watched in great suspense that day and night. But no Indians came. We learned later that it was a ruse of cattle thieves to frighten settlers away that they might steal things left by the fleeing settlers. The thieves were caught and hanged by a vigilance committee. One month after the Indian scare came the scourge of grasshoppers. There had been no rain all summer; everything was burning up from the heat. Toward noon, August seventh, my husband came in saying, 'Have you noticed that dark cloud in the north? I think we will get rain.' About two o'clock in the afternoon the cloud reached us. It proved to be myriads of grasshoppers. They settled down on the fields of corn and soon every green thing had been eaten. Only bare stalks remained. The grasshoppers remained but a few days and then departed for fresh fields, leaving desolation and ruin behind them. Then came a year of drought, and a year in which hot winds ruined our crops. We had about decided to leave Kansas and return to Michigan when there came fruitful years. We prospered and in time built us a pleasant home. In September, 1909, we rented the farm to our son Clifford, and built us a home in South Haven, where we now reside."

Mr. and Mrs. Robinson are members of the Baptist church.

Flora Bella (Olive4, Jane3, Jane2, John1) was born January 12, 1874, in Lacota, Mich. Her childhood was spent amid the trying times of Indian raids, drought and grasshoppers in Kansas. She secured a good common school education. On June 5, 1892, she married John Wm. Eckert. They purchased a farm at Blackwell, Okla., where they made their home. Six children were born to them. Mr. Eckert died of typhoid fever September 28, 1908. Mrs. Eckert finding it difficult to manage a farm and care for five little children, married Elbert E. Ebright, October 21, 1909. Her oldest son and oldest daughter are attending high school at Blackwell. Mrs. Ebright is a member of the M. E. church.

Rosa May, (Olive4, Jane3, Jane2, John1) daughter of Olive and Charles W. Robinson, was born March 28, 1876. She grew to womanhood on the farm near South Haven, Kan. On November 6, 1898 she was married to Wm. F. Stiger, a farmer. They soon secured a farm at Nobe, New Mexico, where they now reside. Mr. and Mrs. Stiger are members of the Baptist church.

Breyman Carl (Olive4, Jane3, Jane2, John1) was born near South Haven, Kan., February 17, 1878, and grew to manhood amid the great corn and wheat fields of that state. He was married December 4, 1902 to Miss Frances Stanicek. They went to Geddes, S. Dak., where they purchased the farm they still reside on.

Oliver Winfield, (Olive4, Jane3, Jane2, John1) son of Olive and Charles W. Robinson, began his earthly career November 1, 1879, on his father's great farm near South Haven, Kansas. He secured his education in the common school at South Haven. He was married to Miss Julia Stiger, June 14, 1900. They purchased, in a short time, a farm at Nobe, New Mexico, where they resided until 1912, when they exchanged the farm for property in South Haven, Kansas, where they now reside.

Nellie Grace Robinson (Olive4, Jane3, Jane2, John1) was born August 15, 1885. She attended school in South Haven. In her girlhood she united with the Baptist church. On November 11, 1906, she was wedded to Jesse Wm. Blurton, a farmer by occupation. Their home was at Sedgwick, Kan., until 1912, when they moved to Emmet, Idaho.

Clifford Arthur, (Olive4, Jane3, Jane2, John1) youngest son of Olive and Charles W. Robinson, was born December 24, 1886. On his father's farm he learned farming and in the nearby schools secured his education. He married Miss Effie May Hamblet, June 2, 1909. They have had charge of his father's farm since October, 1909. Mr. Robinson is a member of the Baptist church.

Beulah Marie Robinson (Olive4, Jane3, Jane2, John1) was born December 12, 1888. Her youthful days were happily spent in attending school and in learning the art of housekeeping under her mother's instruction. She united with the Baptist church when a girl. She was married to Roy Cottel, February 24, 1909. Her husband is a farmer and their home is six miles northwest of South Haven.

Edith Hazel, (Olive4, Jane3, Jane2, John1) youngest child of Olive and Charles W. Robinson, was born on March 2, 1892, near South Haven, Kan. Her childhood days passed quietly and happily on the farm. On November 2, 1910, she became the bride of Thomas F. McBride. Mrs. McBride is a member of the Baptist church. They lived on a farm seven miles from South Haven, Kan., until February, 1913, when they went to Tulsa, Okla., where Mr. McBride has taken up his former occupation as a baker.

BLNdesign, 2021. Adapted from a template by w3schools.com